Home History of the Village of Warwick

History of the Village of Warwick

Warwick has been under human occupation for at least twelve thousand years though cohesive and relatively permanent communities of Indians probably did not appear until about two thousand years ago. They liked this area because of plentiful springs of fresh water and the proximity of the Wawayanda Creek which teemed with fish and fowl. The area was remarkably free of infectious diseases and though the quantity of food was small its variety was seemingly endless. 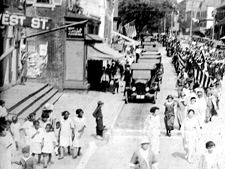 “Today, our village is one of the few in the state that can boast of surviving the mall-mania
of the 1980s and 90s and maintaining the integrity and commercial
vitality of its central business district.”

Sedentary farming came very late, not that long before the appearance of European trappers and hunters in the 1650s or so. Population density increased but remained extremely low. Hunting and gathering practices remained predominant.

When whites began to settle permanently in the area, after 1703 when a land patent, called Wawayanda, was signed with the local Minsi Indians, the largest aboriginal village was Mistucky. In 1719 Benjamin Aske purchased a small portion of the patent and established a farm, called Warwick, from which the present village soon took its name. In the 1730s, the ancient Wawayanda Path was transformed into a colonial King’s Highway and the area was opened up to white settlement. In 1749 a Colonel Beardsly bought land along the Wawayanda Creek from Aske and began to subdivide it. By 1770, the Indians had left and Warwick village was emerging as a provisioning, social and religious center for surrounding farming families. It would boast several famous inns and eateries, notably Bard’s Tavern and the Wayanda Hotel.

After the Revolutionary War, the hamlet of Warwick became one of many hamlets that comprised the new Town of Warwick. It was overshadowed by neighboring hamlets of Bellvale , Florida , New Milford , and Sugar Loaf. All this changed dramatically with the construction of the Warwick Valley Railroad in 1860. It was headquartered here and within a few years Warwick hamlet was transformed into a prosperous and bustling center of commerce, banking, and retailing. In 1867 it was large enough to be incorporated as a village and to be endowed with its own government. Public amenities like a library, “firemanic” companies, waterworks and tree-lined streets were soon established. The number and size of churches multiplied and a private school, the Warwick Institute, drew students from the town’s many one-room school districts. In 1864 the First National Bank of Warwick opened, followed eleven years later by the Warwick Savings Bank. These became powerful financial institutions which lent capital to the expanding local dairy and orchard industries. Both town and village developed a strong identity through the established of two vibrant weekly newspapers, the Advertiser in 1866 and the Dispatch in 1885. 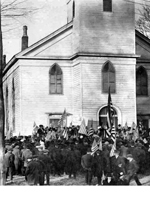 By 1902, the village had its own telephone and power companies and it had taken on characteristics of a prosperous suburban community replete with a lecture hall/ballroom in the elegant Red Swan Inn and in the venerable Demerest House and Warwick Valley House all a stone’s town from the gracious Lehigh and Hudson River Railway station. The village became the region’s premier shopping center and a mecca for summer vacationers. In 1916 a hospital was opened followed a year later by the Village Board of Trade. In 1927 the Albert Wisner Library was dedicated.

The emergence of the automobile age and the demise of the railroad took its toll on the village. A further blow came with the steady decline of our town’s agricultural mainstay, dairy farming. In the 1950s and early 60s business declined on Main Street , the Red Swan Inn was demolished, and many buildings, including the Oakland Theater, fell into disrepair. The Chamber of Commerce, founded in 1939, struggled valiantly to keep businesses on Main Street from going under altogether.

A dramatic revival began in the mid-1960s through the leadership of a new generation of entrepreneurs like the retailer Mike Myrow and the media mogul Edward Klein. It was also sparked by the village’s spectacular centennial celebration in 1967. A new civic spirit and engagement emerged. Public parking lots were built, shade trees were planted, businesses were modernized, and historic buildings and homes were restored to their former grandeur thanks to leadership from the Historical Society which helped place the village on the National and State Registers of historic places.

By 1990, Warwick could again claim its name as the county’s Queen Village. This remarkable renaissance was the Hudson Valley’s best kept secret until the launch of Applefest by the Chamber of Commerce and the opening of a vibrant Farmer’s Market.

Today, our village is one of the few in the state that can boast of surviving the mall-mania of the 1980s and 90s and maintaining the integrity and commercial vitality of its central business district. The village can be proud of its many public and privately-supported parks, museums, galleries, hospital, community center, housing for the elderly, and other amenities.